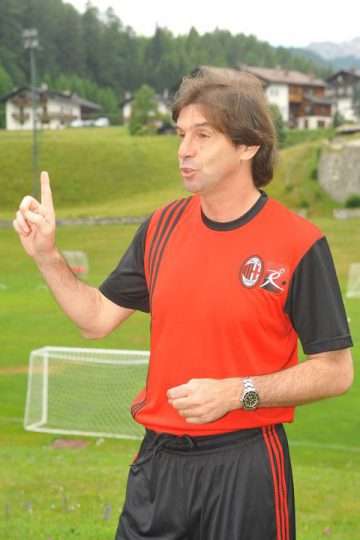 Filippo Galli, responsible for the AC Milan youth sector and ACMilan Coach for the ACMilan Soccer Camp 2011 organized by Sporteventi, can be satisfied by the match results of the last weekend: from AC Milan Primavera team (U19), who has won the derby match with InterMilan, to the AC Milan Giovanissimi Nazionali team (U14) where plays Lorenzo Ferrari, who showed his qualities also during the AC Milan Football Camp of Cortina d’Ampezzo (Dolomites mountains – Alps, Italy) in 2005. Also the AC Milan Allievi Nazionali (U16) team have won, with the help of Boateng Kingsley, another talent who took part in AC Milan Summer Camp in Cortina d’Ampezzo from 2004 to 2006.

As every year, Filippo Galli will be involved as ACMilan Coach in the AC Milan Soccer Camp 2011 organized by Sporteventi. Also Pierino Prati, Stefano Eranio, Gino Maldera and Fulvio Fiorin will join the group of the AC Milan Coaches that will direct the AC Milan Camps.